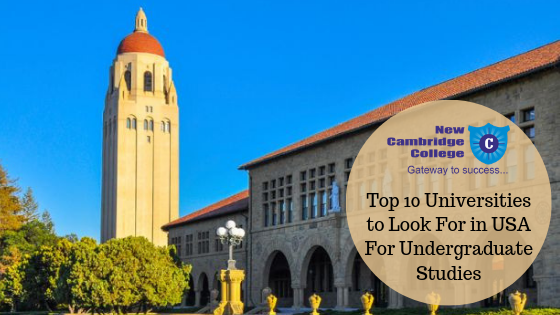 Top 10 Universities to Look For in USA For Undergraduate Studies

The USA is one of the most popular destinations for international students.

After high school comes the time to find yourself the university and course that will lead you to the path of your future. Everyone seeks a place for learning, discovery, innovation, expression, and discourse. But how to find what is best for you? Given below are the top 10 universities in USA for undergraduates that you must look up for your studies.

Stanford University is a private research university in Stanford, California. It is known for its academic strength, wealth, proximity to Silicon Valley, and ranking as one of the world’s top universities. The university is organized around three traditional schools consisting of 40 academic departments at the undergraduate and graduate level and four professional schools that focus on graduate programs in law, medicine, education and business.

MIT is a private research university in Cambridge, Massachusetts. Founded in 1861 in response to the increasing industrialization of the United States, MIT adopted a European polytechnic university model and stressed laboratory instruction in applied science and engineering. It has since played a key role in the development of many aspects of modern science, engineering, mathematics, and technology, and is widely known for its innovation and academic strength, making it one of the most prestigious institutions of higher learning in the world.

The California Institute of Technology (Caltech) is a private doctorate-granting research university in Pasadena, California. Known for its strength in natural science and engineering, Caltech is often ranked as one of the world’s top-ten universities.

Princeton University is a private Ivy League research university in Princeton, New Jersey. Founded in 1746 in Elizabeth as the College of New Jersey, Princeton is the fourth-oldest institution of higher education in the United States and one of the nine colonial colleges chartered before the American Revolution. Princeton provides undergraduate and graduate instruction in the humanities, social sciences, natural sciences, and engineering. Princeton has the largest endowment per student in the United States.

Yale University is a private Ivy League research university in New Haven, Connecticut. Founded in 1701, it is the third-oldest institution of higher education in the United States and one of the nine Colonial Colleges chartered before the American Revolution. Yale College undergraduates follow a liberal arts curriculum with departmental majors and are organized into a social system of residential colleges.

The University of Chicago (UChicago, U of C, or Chicago) is a private research university in Chicago, Illinois. Founded in 1890, the school is located on a 217-acre campus in Chicago’s Hyde Park neighborhood, near Lake Michigan. The University of Chicago holds top-ten positions in various national and international rankings. The university is composed of the undergraduate college as well as various graduate programs and interdisciplinary committees organized into five academic research divisions.

Johns Hopkins University is a private research university in Baltimore, Maryland. Founded in 1876, the university was named for its first benefactor, the American entrepreneur, abolitionist, and philanthropist Johns Hopkins. The opportunity to participate in important research is one of the distinguishing characteristics of Hopkins’ undergraduate education. About 80 percent of undergraduates perform independent research, often alongside top researchers.

Columbia University (Columbia; officially Columbia University in the City of New York) is a private Ivy League research university in Upper Manhattan, New York City. Established in 1754, Columbia is the oldest institution of higher education in New York and the fifth-oldest institution of higher learning in the United States. It is one of nine colonial colleges founded prior to the Declaration of Independence, seven of which belong to the Ivy League. It has been ranked by numerous major education publications as among the top ten universities in the world.

New Cambridge College is known as the best immigration consultant in Chandigarh. With years of experience and high visa success rates, they help you and guide your way to get into the university of your dreams and follow the path to success. Follow this blog to choose from the top 10 universities in USA for undergraduates.