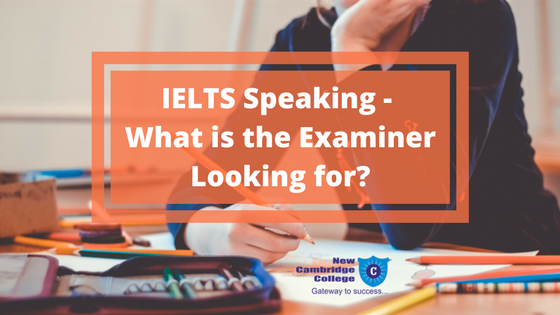 IELTS Speaking: What is the Examiner Looking for?

Things to keep in mind

Oxford dictionary defines speaking as the action of conveying information or expressing one’s feelings in speech. Taking this into consideration, the International English Language Testing System laid the foundation of its IELTS speaking module on same grounds. In order to make students or working professionals adapt easily in an environment where English would be their primary language of instruction and interaction, IELTS has done a tremendous job by selecting appropriate method of testing their speaking abilities.

To begin with, let’s have a look at what IELTS speaking module is. Without any technical or out of the box questions, IELTS speaking is no less than a formal conversation or an interview with someone. Starting with the basic introduction, which includes some questions related to one’s personality; field of study; future plans or hobbies, the candidate is asked to speak for 1-2 minutes in a Cue-card round which is the second part after introduction. The Cue-card round is an answer to a general situation or experience of daily life, for which the candidate has to answer for maximum 2 minutes. It is followed by a follow-up question round in which the examiner asks 5-6 questions related to the cue card.

For all the high achievers who wish to score 7+ bands in speaking module, it is important to know what is expected out of the candidate during the speaking test in IELTS. First of all, the competitive advantage which makes this module stand apart from others is its focus on testing how an individual answers a particular question and not what is the answer. In other words, the examiner looks for the way one presents his or her ideas during the exam instead of the content of the answer. Therefore, the need is to be fluent during speaking instead of worrying about the best answer to a question.

Secondly, it is a clear fact that no idea can be put forward in its best form unless it has coherence. Beating about the bush with sentences spoken even with fluency but without any connection are never going to impress an IELTS examiner or any other listener. It is extremely important to generate sentences in mind before speaking. The practice sessions are hence important to develop a hold on generating ideas and putting them in such an order which serves the purpose of answering the question. Thirdly, IELTS, being the test of English language never compromises on the grammatical accuracy of the candidate’s answers. The examiner has a keen eye on the level of grammatical strength of the answers given during test. A candidate with poor knowledge of grammar faces difficulty while answering and it is always beneficial to attend few grammar classes before starting practice in order to freshen up the concepts.

Moreover, an examiner wishes to get an answer to the question asked by him or her and not what is interpreted by the candidate. Therefore, it is of immense importance to understand the question properly. In case, the question is not understood or there is any confusion with a word or sentence, it is advisable to ask the examiner to repeat it instead of giving wrong answer.

Last but not the least, the confidence with which an individual answers during speaking session is also a major determinant of result. The confidence not only gives the examiner an idea of our preparation but also plays a major role in reducing our stress level which ultimately leads us to give good answers. Even if a candidate answers a question by cooking up a story or incident, the level of confidence with which he or she speaks would definitely fetch more bands.

All in all, it is mandatory to be aware of the expectations of the examiner and answer accordingly to score your required bands. New Cambridge College realizes the value of your precious time and money and is ready to serve you in the best possible way to get your dream college or university.